Broadband communication using HAPS and satellites enable area-wide connectivity as an alternative to terrestrial systems. As of today, several systems are under development or are currently tested. HAPS operate at altitudes of about 20 km and can be either static lift balloons and airships, or airplanes. The broadband footprint covers a circular area with a diameter between 100 and 200 kilometers. Balloons and airships do not require energy to generate lift, but are difficult to maneuver because of their shape and the associated aerodynamic drag. Satellite constellations can provide global coverage, but the total data throughput capacity is limited and the spacecraft system and its maintenance are costly.

Great hopes have been associated with the use of satellites or HAPS for the ubiquitous, worldwide availability of broadband communications for more than two decades. Success depends not only on technological feasibility, but equally on the economic viability of the chosen technical solution. One key factor is the data transmission capacity enabled by a HAPS or satellite platform. The required data rate varies with local demand and the scope of application. Onboard power supply shall allow worldwide deployment without seasonal restrictions e.g., caused by limited availability of solar power. Regulatory requirements and government and other safety requirements for aircraft operations must be met by HAPS. Is this technology a suitable alternative to expanding terrestrial networks?

The answer will not be straightforward, as each technology has its particular pros and cons. While satellites circle the globe and may provide a real worldwide coverage backbone, HAPS stay locally on station and provide a very good highspeed coverage for ubiquitous mobile service and fixed access.

Mesh-building for infrastructure cooperation and integration is key to success, as the world is a very differentiated place when it comes to broadband demand. ‘Digital Divide’ is always subject to affordability and demand with a huge difference between the developing and the developed world. But also in the developed world there is ‘Digital Divide’ when it comes to ubiquitous availability of performance-competitive high-speed network and its affordability.

Global interconnection is a key for success for individuals and societies, yet the world is a very differentiated place when it comes to broadband availability. The so called ‘Digital Divide’ is caused by affordability and separates the developing from the developed world. But there is ‘Digital Divide’ even in the developed world when it comes to ubiquitous availability of performance-competitive high-speed network and its affordability.

Satellites may provide world-wide coverage for sparsely populated areas, while HAPS can provide ubiquitous, nomadic access, with no difference between serving a home (Fixed Wireless Access, FWA) or a mobile phone with LTE or 5G/6G standard. Solar HAPS can provide cost effective solutions for the developing world in regions near the equator where solar power can provide energy for propulsion and data transfer. Long endurance of weeks and months are possible and were demonstrated in tests. Hydrogen propulsion enables HAPS flight times of several days, regardless of season or latitude and can handle high data volumes. Such applications are currently not possible with the power from solar cells or conventional fuels. Solar power as well as ‘green’ hydrogen support zero-emission standards.

The use of geostationary satellites allows coverage over a wide fixed geographic area, using special terminals for data processing. The time lag between send and receive, called latency, is considerable due to the long distance between ground and the geostationary orbit and prohibitive for some applications. LEO satellites orbit between 350 and 2000 km and the latency problem is no real issue, but effective geographic coverage with sufficient bandwidth requires a constellation with some thousand satellites and a large number of special terminals or base stations with radio masts for mobile networks. Low-orbit satellites, because of their limited lifetime until re-entry into the atmosphere, must be permanently produced in large numbers and replaced in orbit, and are therefore costly.

High altitude platforms with flight altitudes around 20 km can be used to complement satellites. Low wind speeds prevail for the most part of time in this region of the stratosphere, which allows quasi-geostationary operation. HAPS platforms can be implemented by static lift vehicles like balloons or airships, or by airplanes. Balloons and airships require no additional energy for lift, but are difficult to position geostationary due to their shape and associated drag. The antenna of one vehicle covers an area of about 100-200 km diameter on the earth’s surface. HAPS are part of the civil aviation system and have to be operated as safe and reliably as other commercial aircraft. During take-off and ascent into the stratosphere the aircraft have to withstand or avoid the environmental conditions of the lower atmosphere, like wind gusts, rain and icing. Their airworthiness has to be demonstrated to the certifying aviation safety authorities. Manufacturing and operation need to follow common aviation standards

Similar to satellites, HAPS always have a direct line-of-sight to transmitters and receivers on the ground, so limitations of signal propagation due to mountains or buildings are low. The achievable latency is lower than with LEO systems and can be less than 1 ms depending on the communication technology.
Deutsche Telekom demonstrated the seamless integration of a ‘flying radio tower’ into the terrestrial communications network in October 2020 with a G 520 aircraft operating at FL 450 (15.7 km) in Bavarian airspace and established a stable broadband connection to a commercially available smartphone. HAPSMobile demonstrated in September 2020 a video call between California and Japan, using an LTE capable antenna on their solar powered platform.

Purely solar-powered aircraft, with battery energy storage as a buffer, can ideally achieve a repeatable day-night cycle limited only by maintenance requirements or aircraft system lifetime with very low operating costs. The still quite low yield of available solar energy requires ultralight aircraft whose year-round operation is limited to the tropics near the equator. Only a small power of about 100-1000 W is available for the payload; this limits the capacity of the possible telecommunication supply. Airbus Defence and Space already has a flight-proven solar-powered platform, the ‘Zephyr’, which demonstrated a flight endurance of almost 26 days, underlining the viability of the concept.

The aerodynamic performance of a HAPS requires large wingspans which can be achieved by sophisticated structural design and distribution of individual masses (engines, payload, fuel) along the span to reduce bending stress on the wing; thus, each wing section carries a portion of the total weight. However, the loads on of the wing must also take into account the twisting of the wing along the span. Aeroelastic effects couple the wing torsion to the bending load via the distribution of lift along the span, but also to the controllability, especially about the roll axis. In addition, due to a large bending deformation, the engines may interact with the twisting of the wing and also with the pitching motion of the aircraft. The influence of these interactions on safe flight operations, especially for avoiding flutter and for controllability in the turbulent atmosphere, must be quantitatively demonstrated for all possible operating conditions, which is a requirement for certification and operation in civil airspace. The extreme couplings can become unstable and lead to failure without the support of active control to stabilize the deformations. To date, tests with highly flexible aircraft configurations are in the experimental stage.

Liquid hydrogen has a 3 times higher gravimetric energy density than fossil fuel. This allows for the design of airframes with a very high safety standard and multi-day operation independent of latitude or seasons. The StratoStreamer of Leichtwerk AG is a platform based on decades of experiences in German high performance sailplane design. Its payload can handle data capacities of more than an order of magnitude beyond those of LEO satellites. This allows an ultra-low latency of under 1 ms high-speed data connections for the Internet of Things and connected mobility and empowers new technologies. Those services are ubiquitous and immersive, independent from fixed line access. ‘Green Hydrogen’ enables powerful zero-emission propulsion. 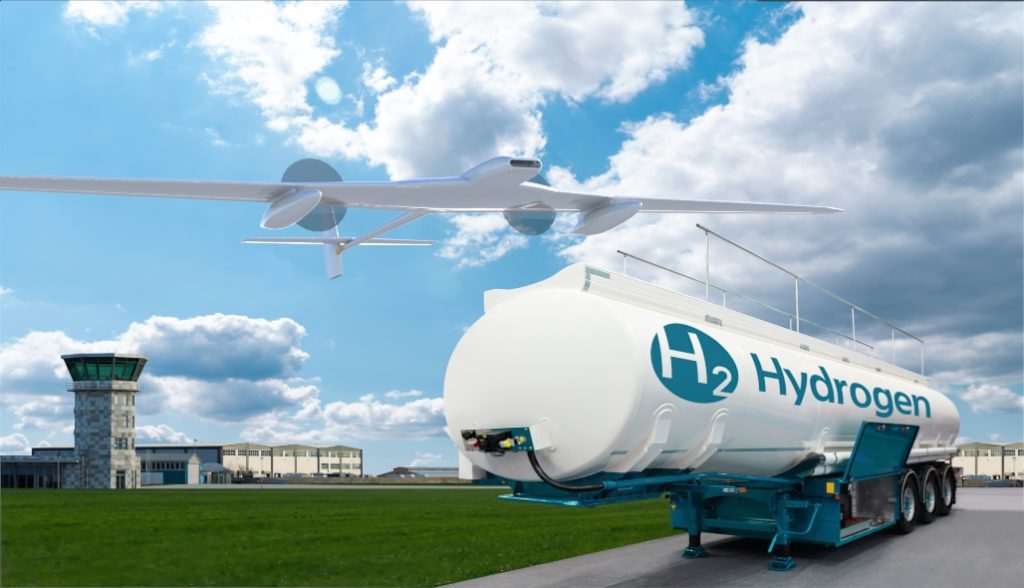